I believe the path that leads to happiness comes down to a verse I once read: "You will never have anything that can get wet in the rain". Nothing that can complicate your life. Only having dreams, hopes, fantasies, projects. A private world with dreams that can't get wet.

Jordi Agràs Estalella.
Regional Director of Culture for the Government of Catalonia in Tarragona

The ancient chronicles say that, one day, the water that covered everything retreated, leaving behind rich, fertile land and a trail of fossilized reminders. That land, a crossroads of hopes and determined wills, was altered and moulded according to human desire to carve out a new landscape. Man tamed the stones and fields, built towns and villages and planted cereal crops and vineyards. And all so many years ago ...! Years and years; at least a good handful of centuries. And we would run the risk of losing sight of the trail that led us here were it not for artists like Jordi Isern, who is able to transpose onto his canvases everything that makes up and represents the collective memory that defines us as a people and as a civilized nation.

When we look at the Conca de Barbera landscapes painted by Jordi Isern, not only do we see a masterfully captured image of the present, closer study reveals the interwoven connections and memories that connect us with our origins and the early settlers. We are thus presented with an opportunity to glimpse the way the rivers that reflect the grey of the clouds and varnish ancient paths also carry the traces of water that never completely disappeared and is always striving to return; and the way the trees, inheritors of all that is green in the world, hold snippets of conversations and legends which, with the help of the wind, curious and playful by nature, they whisper to keep them from being swallowed by the black oblivion; and the way the snow that covers the sleeping ground with a frozen silence, councils it to rest a while, sleep little baby sleep, so that the flowers and fruits come only when the time is right to once again bloom, resplendent with colour and silken textures; or how the sun that toasts the forest litter and bakes the stones of castles and ancient walls, before it dips away asks the moon to shine bright because the brave and faithful people of Conca deserve crisp, clear nights, reminiscent of the lines sketched by Jordi Isern, honest and free, on a blank canvas. Honesty and freedom that are - and have been - rewarded by the select revelations the Conca de Barbera countryside has made, opening its soul, generous and grateful, so that Jordi may capture it with his skilful brush strokes, to bring them to us, pure and complete. We should not be surprised, therefore, when we contemplate the vines he paints - green in spring, tinged with red in autumn –, by our ability to taste the aromas, experiencing the fresh and mischievous sensations, with a hint of black pepper, of a Trepat grape harvest; or when one of his paintings enables us to immerse ourselves in the paths that meander between creeks and streams, to smell the sweet scent of the dew that forms dazzling, diamond droplets on the leaves and stems; or when we pause to look more closely at a town or city, it is not only houses we see, brimming with life, but we sense the smoke rising to envelop us with the aroma of a tale told around the fire, while the logs turn to hot ashes, mottled with orange reflections.

Jordi Isern's work is a living thing, it pulsates, breathes and evolves with the changing light and creates emotional bonds that are impossible to describe, like the Conca de Barbera landscape, which captivates you and holds you, making you feel part of it, a phenomenon that can only be explained by the spirit, open and splendid, of its people, worthy successors of all that has come before. It is, in turn, also impossible to define or adequately describe the impossible creative talent that Jordi Isern possesses, which allows him to produce such delicious, tasty fruits, that, generous and magnanimous - like the people of the Conca -, he shares with us all. Allow me, if you will, to make one last wish: that our friend, Jordi Isern, continues, for many more years to come, to act as an ambassador for Conca de Barbera, its landscape, its history and the past and present of who all love it and fill it with life. 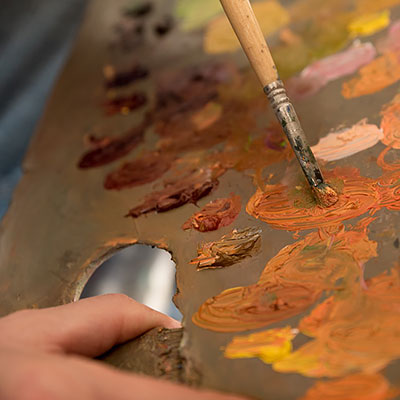 In formal terms, the painting of landscapes in pictorial art is understood as the desire to faithfully represent the natural environment, leading to its being, in that sense, a genre that, despite its potential for great technical perfection and excellent emotional capacity, is often constrained by some of its own overly functional and cold coordinates. Jordi Isern's paintings, however, in which he manages to artistically represent the forms and colours of nature are also infused with human spirit and sentiment, a quality which has been recognized by audiences, not only here at home, but throughout Europe, America and Japan, leading to his being able to celebrate this landmark anniversary of 25 years as a painter dedicated to his art.

Jordi Isern was born in 1969 in the city of Barcelona, a thriving European city which, in 1992, successfully organised an Olympic Games that would consolidate its position as a city of international renown. At the turn of the twentieth century, however, the painter and his family felt the pull of the countryside and the land of their ancestors and decided to settle in Alcover, the birthplace of the artist's father and a town located in the foothills of the Mussara mountains in the Alt Camp region, which extend across the Camp de Tarragona plain, looking out towards Valls.

The painter quickly fell in love with the Alcover landscape, through which the river Glorieta, a tributary of the Francolí, flows, an area dotted with forests and meadows, where vineyards, olive groves, carob trees, hazelnut trees and market gardens abound. These lands, surrounded by the Prades mountains, opened a world of new discoveries for the artist, one of which was getting the know the Conca de Barbera, where he established a second studio in the medieval town of Montblanc - the site of Catalonia's first ever parliamentary meetings - bounded by the mountains of Miramar, where the oaks and holm-oaks grow.

Jordi Isern loves nature, using his paint to make it his own and counselling us on how it should be viewed. His paintings show us that nature, when afforded the respect it merits, is Man's greatest ally, that the cycle of life and death makes way for the birth of new life, that a great tree is contained within a new bud and that harmony and balance, demonstrations of beauty and peace, do exist and it is our job to find it.

In this book, the people who know Jordi Isern, such as Jordi Agràs Estalella, Hiroyuki Kitahara, Josep Maria Vergés, Joaquín Castro San Luis, Eloi Tost, Jordi Sargatal and Òscar Rodbag, offer their insightful thoughts on the painter and his work. Let me add my own voice to theirs in congratulating the artist on twenty-five years of pictorial success and encouraging him to continue bringing us pictures that reveal the transcendent lessons and qualities offered to us by the landscape.

JORDI ISERN JUBANY fell in love with Tenerife after visiting the island. He was blown away by the green valleys, the vastness of the El Teide volcano, the native flora, particularly the tajinaste with its red and blue petals, the Atlantic Ocean, its coastline dotted with beaches and rocky outcrops, the mountains, such as Las Mercedes or La Esperanza where Canary Pines grow straight and slender, seemingly in an attempt to reach the sky, the majestic Orotava Valley and, in the distance, Puerto de la Cruz, an extensive array of panoramas which he studied to later recreate them with his oils.

Jordi Isern is a much-loved artist in Tenerife, for his art, for his open, approachable nature and, above all, as the result of a great appreciation for his paintings. Each one of his exhibitions in Santa Cruz de Tenerife has been a success. That is down to the fact that his work falls within the scope of reality, reaching deep into the human soul, the figurativism of his oils representing a piece of this island, through the prism of the technical detail, the rich palette of colour and, in particular, the skilful execution and testimonial nature of each painting.

Any town square adorned with a dragon tree, such as in Icod de los Vinos, or those in Tacoronte, have been captured on his canvases with the artists own style of naturalism which he provides for the enjoyment of others. The streets of Santa Cruz de Tenerife, its churches with centuries-old towers, the multi-coloured flora that adorns every corner of our island, have, for Jordi Isern, been key in motivating him to paint all this island of Tenerife has revealed to him, to create and produce a symbiosis between a love for this land, his art and most intimate feelings.

Jordi Isern's 25th anniversary of making nature his own, breathing the air of Canary Pines and the infinite greenery of Pyrenean valleys, wandering, treading the path of a poet at home, on our island of Tenerife and crossing the seas to distant countries such as Japan. The 25th anniversary of an artist whose landscapes transmit an essence of joie de vivre, with whom light and colour have made a pact, enabling us to enjoy and forge a deep bond with our land. Virtues that place you in a leading place in Spanish landscaping. 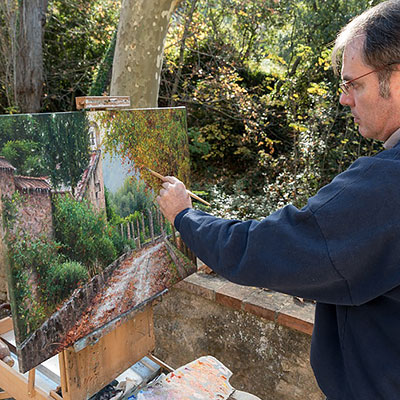